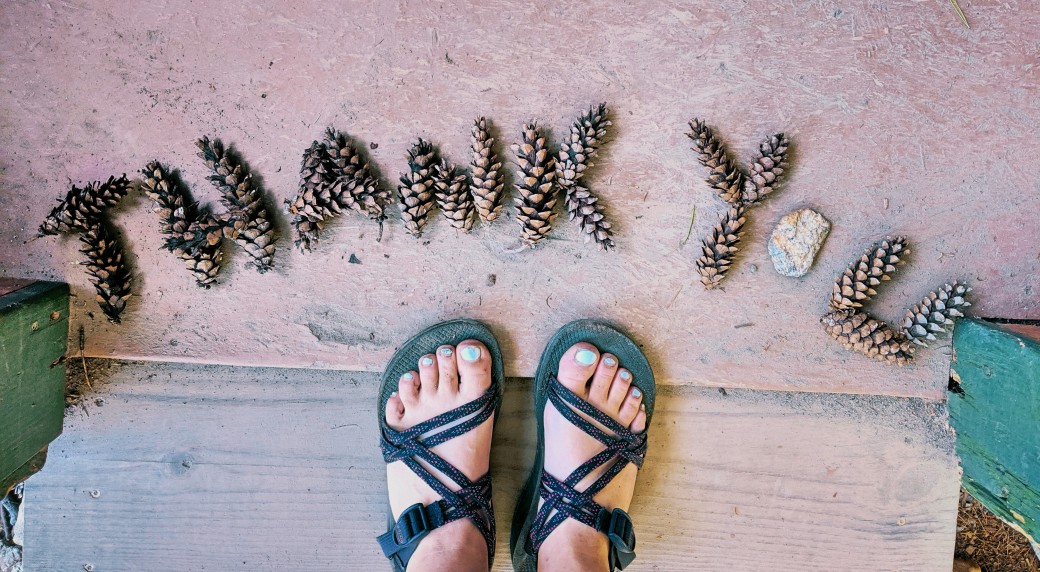 A lovely note a group of kids left outside their cabin.

“Strawberries first shaped my view of a world full of gifts simply scattered at your feet. A gift comes to you through no action of your own, free, having moved toward you without your beckoning. It is not a reward; you cannot earn it, or call it to you, or even deserve it. And yet is appears. Your only role is to be open-eyed and present. Gifts exist in a realm of humility and mystery–as with random acts of kindness, we do not know their source.“
— Braiding Sweetgrass, Robin Wall Kimmerer

The sense of an ending is in the air—does autumn ever smell like anything different?—and I’ve been reflecting on these past two years and what they’ve given me. It’s easy to be cynical: I’ve made little money, my retirement accounts have flat-lined, I’ve eaten more vegetarian meatballs than healthy for any single person.

But here I am. Still.

This summer I posted my address on social media and invited people to write to me. Send letters, I said. Send pictures, send anything. It was both selfish and altruistic. I’m a glutton for letters, for paper scratched up with ink, but I also believe that sitting down and writing forces you to be alone and connect with yourself in ways we rarely do these days. There is no delete button. You will not know the person’s reaction for weeks to come. You are sending a token of love out into the hostile world and hoping someone cherishes it, appreciates it, sees the vulnerability revealed in that scrap of paper and loves you more for it.

People wrote me. They sent handwritten letters and cards. They sent poems and artwork and stickers from their local gear shop. And it was incredible. All of it. The words. The tokens of thoughtfulness. The fact that people had taken the time to write and postage and mail a letter when a lot of us cannot even be bothered to unload a dishwasher.

Those letters were a gift. Every time I found one resting in my hike center mailbox tears sprang to my eyes.

And it was interesting that nearly every person who wrote mentioned my blog. This little ole thing.

I never thought of it like this, but perhaps my blog is a gift to the world, a sliver of artistic musings I share with the universe, hoping they inspire and entertain and enthrall. And those letters were a gift to me, small offerings saying, I see you, I’m thinking of you.

The world’s a beautiful place, isn’t it?

Gift culture is often thought of as commodity culture, but they’re not the same thing. Not if you see a tufting cattail and smile. Not if you pass along an article to a friend saying, thought of you. Not if you perceive the small treasures the earth offers up to you, the trembling, tentative threads of human connection pushing toward you, as gifts. It’s all there. We already have it all.

The last time I visited Rochester my mother cleaned my car. My dad installed a new rear windshield wiper.

A summer camp counselor I trained for hikes ran up to me, hugged me, when I returned from a two-week paddling trip this summer. We didn’t even know each others last names.

I led a hike with fifth graders the other day, and I told them that the decaying tree stumps reminded me of abandoned cities, and for the rest of the hike they stopped at countless bits of nature and told me what it reminded them of, and I was so grateful that they could still find the magic in the hollows of trees and acorns and spongy moss, and that they shared that magic with me, and that these tiny mundane pieces of nature were really miracles disguised as something ordinary, something effortless, and that everything about nature is an absolute gift.

This is what these past two years have given me. Less money, more gratitude. Less stability, more freedom. Less tangible items, more intangible connections, with myself, with others, with nature.

And what a gift that all is. How priceless. How incomparable.

(Deep thanks to everyone who wrote to me this summer! For the record, you can write me whenever and I will always respond. Address is still currently 1872 Pilot Knob Road, Kattskill Bay, NY 12844, but it’ll change in the next couple of months.)

He sat across from me on the bus. I watched out of the corner of my eye as he drew shapes onto a blank piece of paper. Here, he turned to me suddenly. You try. I shook my head. I’m good. He continued drawing. There’s no right or wrong, he said, still doodling with aimless concentration. I’m good, I replied.

Pause. Here’s what you need to know. I am 21. It is my first summer staying in Pittsburgh. I am an academic University fellow, getting paid to study Anglo-Indian literature in a sea of science students who study neural connections in lab mice, and parasitic growth, and other things that involve lab coats and goggles. I am scared of not being taken seriously. I am scared that my work will be seen as inconsequential. I am self-deprecating and insecure. I miss India. I am desperately trying to call this city home.

That is the first memory I have of Will. Him drawing nonsense on the bus on our way to an academic retreat. I didn’t want to draw nonsense, but I wanted to be the type of person who could draw nonsense, who could scribble aimlessly in public and not care that it was subjectively bad, objectively meaningless. (There is power in not caring. I knew that even then.)

Will was a dancer. He wasn’t trained at all, but music played, and the notes coursed through his limbs, and he moved and swayed like gravity felt different to him. He danced at a second-floor studio above a warehouse. You could walk to one side of the open studio and look down below to lines of sinks, and doors, and porcelain tubs, all neatly arranged like terracotta soldiers of the city. It made it more special that the dusty mundane lived right below us while creatures of the night danced up above. In that dance studio you could feel like forgotten gods.

As you grow older there are places you build shrines to in your head, places that mean more as symbols than structures. That dance studio is one of them, so sacred I don’t even want to share its name with you. I would go there in the darkness and watch Will and the others move like liquid jazz. To piano. To ambient rock. To Radiohead. I would sip cider, and watch them, and write poetry on the walls of this warehouse dance studio and feel like I was interesting, like I was someone worth knowing, and I’d emerge onto the street in even darker darkness and the fact that I never visited the studio in the daylight was important, I never tarnished its pristine mystery.

I could tell you much about Will.

I could tell you that one time after leaving the studio I accidentally missed the last bus home. Even now it stands as a beacon of fear in my mind. Alone in a dark city. Who to call. How to get there. There are strange men on the streets. I am nervous. I am scared. I call the university shuttle, only to be told I am too far away. I think of walking the four miles back in the 2 AM darkness. Would I make it? Would I be safe? It is one of those sobering moments, holding a phone with limitless connectivity and yet no one I want to call. (Sometimes we invent our own loneliness.) I hesitate and then call Will. He comes back for me.

Or I could tell you that Will was an orphan, a strange and heavy word. I could tell you that I once asked him what he thought of people’s reactions to his loss, their gentle I’m sorrys when he shared that part of himself with them. Is it enough, I demanded. Is their response too rote, too cliché to still carry meaning? I was 21. I was starting to think more deeply about words and how they felt when rubbed against skin. I wanted life to feel bigger than it was. It’s enough, he told me. They’re doing their best. I know what they’re really trying to convey, and I’m not sure there are words for it.

What I am going to tell you about is that one night at the gallery crawl. The first Friday of every month the art galleries in the city opened their doors, and you could stroll down the sidewalk and pop into each one, admiring the art and sampling the free snacks and wine.

I was 21. Nights like this made me feel cultured and free. The darkness and the art and the wine all muddled inside of me, feeling young and old all at once, feeling like a human but also a small flowered vine desperately trying to grow through the sidewalk cracks.

I could tell you a lot about First Fridays in the city.

I could tell you that my favorite exhibit was the Victorian basement parlor full of taxidermy animals.

I could tell you about the loneliness and frustration I felt on a verge of a breakup as I watched a man from an experimental music band thrash a large metal chain against the ground.

I could tell you that weekends like this made me never want to leave.

What I am going to tell you about is walking with Will and some fellowship friends down the sidewalk at night (do young people ever live in the day?), stumbling upon a man reading Ginsburg on a milk crate. He recited and gesticulated, the words from Howl releasing into the street like a sudden hymn. And it was about the words, but it was more about the moment, the abstract poetry of it all. We watched in almost silence. He finished and stepped down. Then Will asked if he could read.

I don’t know where Will is these days or what he’s doing, and I’m not tempted to find out. Because what if he doesn’t dance anymore? What if he no longer lives his life like jazz, as he once told me he did? What if he’s not the same manic pixie boy from my memory (are you familiar with the trope)? Some people are meant to be comets, streaking once through your life, blindingly beautiful, and never seen again.